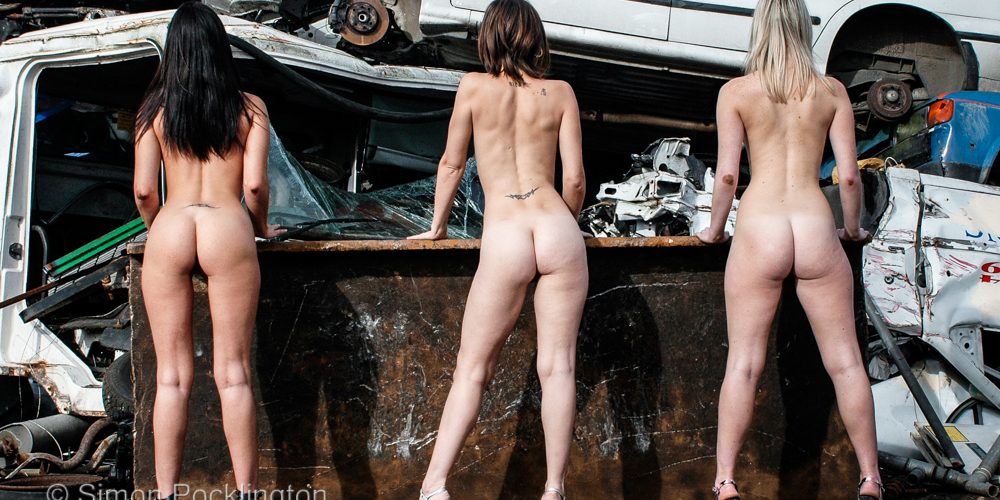 The Scrap Yard Nudes calendar was conceived by the sales director of a metal recycling group. The company wanted to produce a glamour calendar that was more interesting than the average cheesecake versions available off the shelf. Commissioning original photography would allow the company’s products, several thousand tons of recycled metal, to feature in the pictures alongside local, East Anglian, models.

A metal recycling yard is full of exciting visual possibilities, even before you add nudes. The original concept was to produce ‘fine art’ style black and white images. Some directors of the company felt that their target audience would probably favour a little more glamorous theme and that maybe ‘art nudes would be a little too revealing.

When the final images were produced for the first years calendar the client was impressed enough to increase the size from a fairly modest A4 format calendar to A3 plus. Bearing in mind that in 2005 my Nikon DSLR only produced 7mb RAW images this was greeted by a confident ‘OK’ with my fingers firmly crossed. Running some proofs proved that the digital files were up to the job. Fortunately the sales director championed the idea of black and white and first year went to print with a large black and white and inset colour image for each month. Despite some glitches in the printing process, the completed calendar was distributed by Christmas.

Shooting nude girls in amongst sharp, greasy metal may seem like fun; well actually it is, but it offers a special set of challenges; soft bodies and jagged edges have to be kept apart, every surface that the models touched left greasy marks on their bodies and high heels are not the ideal footwear on uneven surfaces. Careful planning ensured the calendar remained in production for three years without any of the models or crew acquiring so much as a scratch

Feedback from may of the companies customers was good, and some of the models found themselves receiving VIP treatment in garages and exhaust centres throughout East Anglia. The target market proved more discerning that the company expected and subsequent editions were solely black and white with more creative nude images.

To provide the safest and most private environment for the girls the shoots were scheduled for Sundays; the only day that the yard was closed. The first Sunday dawned bright and sunny, a trend that continued for every subsequent years shoot. Inevitably a few of the mostly male staff decided that they had something important to do at work on the first Sunday. I had deliberately picked models who I knew were confident and would probably have walked down the local high street naked. Suddenly any spectators became rather embarrassed and disappeared into the offices.

I booked four models for each of two shoots. The idea was to use each of six girls on each of two months of the calendar​. The extras might be disappointed if they did not make the final edit but this gave us a wider choice of images and we were covered if there was a no show. The core of the models I had worked with may times before but the budget meant that test shoots of new models were not feasible so a few were booked on recommendations from other photographers and only after a lengthy telephone interview. Throughout the three years of shoots there was only one no show by a model who had been in the previous years calendar, one girl turned up looking vastly different to her portfolio shots and a third looked stunning in colour but, strangely, rather odd in black and white .

Probably one of the most important pieces of kit I use is a step ladder. Choosing different viewpoints is always important. Get up high and look down. Get down low and look up

See the Out Takes

New models joined us for the next two years editions by which time, to quote the sales director, “We’d just about got the hang of it”. Then the company was sold and the new owners did not continue its publication.